Brighton is without a doubt at its best during the summer months. As our first season here I feel duty bound to spend every sunny moment on the beach (which explains my great tan and distinct lack of posts). With last week's temperatures hitting a rare 28 degrees, we've been swimming in the sea, lounging on the beach and more often than not indulging in a little beach-side beer, so I thought I'd share some of my favourite beach hangouts with you.
My number one favourite is the Fortune of War, along Kings Road Arches at the bottom of West Street. The oldest beach bar in Brighton, it opened in 1882 and has been sating thirsty Brightonians ever since. The decor's all a bit Captain Birdseye with rope-railed stairwells, an arched bar and two wooden hulls which overlook the sea, but it's as friendly and cosy as you can get. During the summer everyone spills out from the terrace onto the beach. It's open until midnight during the week (kids can stay until 8pm) and 2/3am on Friday's and Saturdays so don't be surprised to see folk partying til the early hours in little more than a bikini.
Just along from the Fortune, heading towards Brighton Pier, the Ohso Social is another must-visit. A family-friendly cafe-bar with a large terrace stretching out onto the beach. Feed the kids their (very good) fish and chips and then let them loose on the beach while you kick back with a well-earned glass of rose.
Heading east past the pier you'll come to a little stretch of Bondi (well, ish) where the city's hipsters play beach volleyball on the all-sand courts at the Yellowave Beach Club. Attached is the Barefoot cafe with its front row seats, a climbing wall and large sandpit for the kids. This has become a regular hangout for us as it guarantees me and Mr Dolly a quiet glass of vino while the beasts scale the climbing wall (see below). 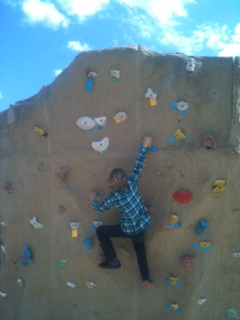 If you want a decent cocktail with awesome views head even further east and the Seattle Hotel in the Marina which boasts the best ocean views in Brighton. Surrounded by gleaming white yachts you could almost be in St Tropez. As one of the city's most romantic spots, it might be worth leaving the kids at home for this one...