Eating out...it's not all about candyfloss at the seaside you know (sadly) 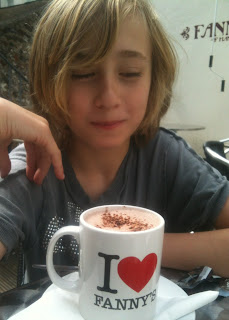 As an ex-restaurant reviewer I used to eat out in London A LOT, so one of my concerns (#423 actually) about leaving the smoke was that I was moving to a culinary desert, where the Aberdeen Angus Steakhouse was the height of sophistication. But of course that's nonsense, Brighton is positively booming with fancy pants restaurants and super-hip places to eat, drink and be Mary. So here is the low-down on my current favourites...

The Chilli Pickle, next to MyHotel in the North Laines, is a cracking place for lunch. This light and airy Indian street food restaurant has certainly made its mark on the culinary map of Brighton. Great curries, dosas and awesome thalis, they even have a nice kids menu.

I really like the Coal Shed in the other (posh) Lanes, which does cracking steaks and a ridiculously good pecan and salt caramel cheesecake. It's friendly and laid back but smart enough to impress.
If I'm out whizzing about on my bike (I know, get me) a bit closer to home is Mason's Deli on Elm Grove, which does HUGE sandwiches for not very much money. Don't go for the coronation chicken please, it's my favourite and always runs out because it's so good, dammit.
And I can't forget the lovely Fanny's of Hanover, just off Elm Grove on Islingwood Road, is a favourite place for me and my boy to hang out (see pic). Good bagels, sandwiches and even the odd Scotch egg, plus excellent coffee served in cheeky mugs, you've gotta love Fanny's.

Now if it's a Sunday roast you're after, get down to my local, The Hartington onWhippingham Road, again off Elm Grove. The roasts here are legendary, with pork crackling so big you can wear it as a cape. It's probably best to rock up early or at least book as I've seen too many heartbroken folk miss out on a roast spud as early as 3pm. Plus they have San Miguel on tap, and for that I am always thankful.

For really good ice cream it's got to be Marrocco's along the seafront in Hove. Sometimes when me and the kids are really living the dream, we'll head down after tea and buy the BIGGEST ice cream (although not bubblegum flavour - huey) and sit on the beach to watch the sunset. According to the locals, Marrocco's is a seaside institution which must be adhered too over the summer months. They also sell cold beer and pizzas and (apparently) a good line in fresh fish, but it's the 24 flavours of ice cream that reels us in weekly.

For raw fish and the like the Japanese chain, Moshi Moshi has a branch in the Lanes, opposite the town hall, which does good sushi. It's got the old conveyor belt action going on, plus if you ask really nicely the lovely staff will bring you soft shell crab that will make you weep with joy.

I can't write a food post and not mention Donatello. The Donatello group of pizza and pasta restaurants have dominated the Italian scene in Brighton for near on a-gazillion years (as seen by the decades of celebrity photos they have decorating the walls). While it might not be super-trendy or serve fancy pants food,  it does do good pizzas and pasta at ridiculously cheap prices, and they love the kids. My lot are huge fans (as is my purse).

Of course, there's tonnes and tonnes of places to eat in Brighton and I will do my utmost to try many  more over the coming months (in the name of journalistic research, of course) and when I remember I'll pop some more up.

But in the meantime, if you can recommend decent kebab shop I'll be forever grateful...
Posted by DollysDay at 14:00